There’s been an unusual lapse between my last string of posts and this post. At first, I didn’t think much of it.  But as more and more time started passing, and I felt the urge to write to get this one out of my system and move on, I found myself in a strange state of paralysis.  And then, it hit me.  This next post would be the diagnosis.  The day when everything became a reality.  No more what if’s (in regard to what the diagnosis would be). No more, maybe it’s not true’s. This was the date when our fears were confirmed.

Even still, I sit staring at my computer screen, yearning to get it out, and hesitant to face it again. It was a hard day, and sometimes, I still pretend it never happened. I realize I need to count my blessings that pretending it never happened is even an option for me. It’s time to share, in attempt to free my mind from this life changing day.

George, Taryn, and I headed back to visit the
Specialist. 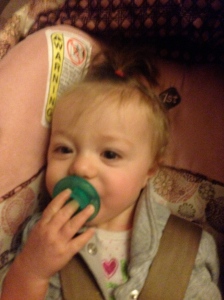 On our drive there I remember feeling anxious, but less so than on our way to the CT scan. George was positive. I desperately needed that. We numbly made our way to the waiting room. It felt like an eternity before we were called back to the exam room, but in reality we waited only 10 minutes or so. They roomed us in the same exam room I was in when they told me Taryn might have Craniosynostosis. Walking into that room brought back a flood of emotions. Thank goodness this time, I knew where the kleenex was stored.

George and I sat in silence as we waited for the doctor.  The air was heavy, saturated with prayer, fears, and even with hope.

The doctor finally entered. Immediately I noticed his hands were awkwardly full.  He had TWO model skulls in his hands.  That’s the moment I knew.  I knew it right in that instant, before he said anything at all. My face grew hot, I clenched my teeth, and my heart sank to a new low. More than one model was needed to show a visual comparison. Taryn’s diagnosis was positive for Lambdoidal Craniosynostosis.

The doctor sat down and did indeed verbally confirm our fears. I couldn’t look at George.  One sideways glance and I could tell he was trying to hold it together as he bounced his baby girl on his knee. I just couldn’t look at him. I knew I would be unconsolable. I tried desperately to hold it together because I knew what I would learn next was important, that I needed to pay attention to what was being explained, but the flood of emotions inside felt like a tsunami knocking on my soul.

The doctor pulled up the CT scan on the computer in the room. The results were easy to read, even to the medical novice.  On one side there was a clear line, showing the open suture. It was healthy and allowing Taryn’s brain to grow with ease.  The other, white smooth bone, with no suture at all.  This closed suture creates pressure on the brain and doesn’t allow for normal brain growth. The brain wants to grow and so the body attempts to make more space by crowding a different suture, in lambdoid babies it’s the opposite front side that begins to boss forward.

We discussed surgery options, and learned that roughly 9 months (only 1 month away) would be the optimal time for Taryn’s surgery.  I cried.  I tried to stifle it, but it was impossible.  Next steps would be meeting with the Neurosurgeon who would partner on the surgery. We asked questions and tried to be as thorough as possible, while internally trying to process our wild thoughts and manage our emotions.  The doctor stated multiple times “this is a major surgery.” Those words would roll through my mind like a loose cannon for the next few months. Sure, we knew it would be intense, but to hear a medical professional describe it that way heightened my fears. I would say I was terrified, but that word seems far too gentle of way to describe it.  You get my point.

We drove home, knowing we would schedule the appointment with the Neurologist. The ride home was a blur.  I cried and cried.  Called family members, and cried some more. George was strong and comforting, but inside I knew he was struggling to be my rock. That afternoon we held our baby so tight riddled with fear, while she just bounced seemingly healthy along, with no worries in the world or understanding of what was coming her way.

This began the repeated nights, mornings, lunch breaks on my knees in prayer. Gut wrenching pain, and then masking it for the rest of the world.  I was simply trying to get through — one day at a time.